i)unique_ptr get( ) : This function return the raw addrss of the memory pointed by the
unique_ptr.

ii)unique_ptr swap( ) : This function swap the memory of the two unique_ptr.

The member functions found specifically in unique_ptr are:

ii)reset( ):This function is found in shared_ptr class but it does not accept two arguments.

Both of these functions are discussed in detail below.

If release( ) function is called without assigning the returned address to any raw pointer or any other pointer then there is bound to be memory leakage.

So whenever you call release() function do not forget to assign the return address to some other pointer that will handle the storage safely.

upS1 now points to the storage containing the string “Wow!”.

The purpose of reset( ) function vary depending on whether an argument is passed to it or not. You can call the reset() function either with no argument or by passing one argument. When a reset() function is called without passing any argument it’s purpose is to free the memory pointed by the unique_ptr .

After freeing the memory up will point to nullptr.

If an argument is passed to reset() function, then the argument must be an address of dynamic storage. In this case what happens is that the previous storage is deleted and the unique_ptr will point to the new storage whose address is passed as the argument.

upC now points to the new storage with the character ‘V’.

Whenever a release( ) function is called instead of assigning newly the storage to a built-in pointer, you can use the reset() function to assign the address to another unique_ptr just like we did above. This makes sure that the storage is in the secure hand, who knows assigning the storage to a raw pointer might just be another superfluous risk that you may be undertaking if something goes wrong; resulting to leakage of memory.

C++ differences between const and constexpr 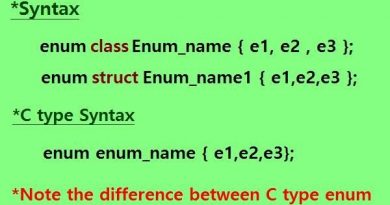